certified with IVN,
Biokreis and ECARF

In the evaluation of leather, all aspects concerning its production must be taken into account. This is the basis for Ecopell’s consistent policy of providing maximum transparency concerning the vegetable tanning we employ in the production of chrome-free Ecopell. Tanning leather with chrome constitutes 85 – 90 % of all leather produced in the world. In the scope of chrome tanning there are important details often missed that prevent or distort a complete pictureof the harmful facts associated with chrome tanning.

Some of these concerning aspects of tanning with chrome are raised in insufficientdetail across a broad spectrum of media, chiefly outlets concerned with environmental issues. Our objective herewith is to offer an accurate overview of facts and controversies in the field of chrome and chrome tanning.

Heavy metal chrome exists in differing  oxidation states that, among other things,dictates  how the chrome element affects the environment. These states vary due to the environmental conditions.

Many economically recoverable chrome deposits are in countries in which extensive mining projects continually cause considerable ecological and social problems. In 2008 about 24 million tons of chromium have been produced. About 2 % of it has been used for the processing of chemical chrome, inter alia as chromium sulfate for the production of leather tanning material but also for the production of dyestuffs and plastics. The largest amount, about 95 % of the chromium has been used in the metal-working industry. The most important chrome deposits are in South Africa (38 %), India (20 %), Kazakhstan (15 %), Turkey (7 %), Russia (3 %), Brazil (3 %), Finland (2 %), Zimbabwe 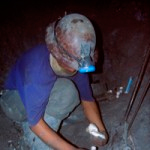 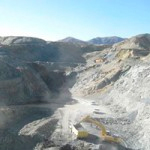 The extraction of chromium is often carried out by large groups or consortiums. The world’s largest mining occurs in Western Limb, near the city Northam (South Africa) which has been exploited by a German-South African consortium since 2008. Chromium is extracted in open-cast mining as well as in underground mining in shallow depths.

In many countries, in which chrome mining is practiced, large parts of the population are very poor. In addition some of the political systems are characterized by corruption, authoritarian governance, lacking rule of law and disfunctional social service. Human rights organizations repeatedly point out the ecological and social problems that appear in relation to large scale mining projects. For example ecological destruction of vast areas especially with open-cast mining projects, water table drawdown and pollution of surface waters, expropriation and expulsion of located, native population, miserable working conditions and lacking occupational safety for the employees of the mines.

In the preparation process of chrome into tanning material, significant masses of earth are moved and much energy is consumed. In the extraction of chromium, ore as well as huge amounts of waste material that does not contain ore-bearing rock is mined. Before processing the chromium, foreign matter must be removed. Every ton of ore includes up to five tons of overburden.

To transfer the chromium into chrome tannin it runs through an elaborate process. The soluble chrome compound are separated from the iron at a temperature of 1000°Cand are treated with sulfuric acid and turned into sodium dichromate (Na2Cr2O7). By reaction in sulfuric solution or with sulfur oxide and soda it turns into chromium sulfate that is used by tanneries as chromium tannin. Worldwide approximately 480,000 tons of chromium tannin areproduced per year. 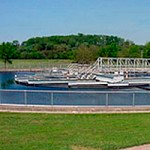 Modern production techniques in the leather industry can save energy, raw materials and waste. Unfortunately these techniques often do not occur in undeveloped and developing nations. The tanning of leather with chrome has been used since the 19th century. Today 85-90 % of the worldwide leather production, in total approximately 24 billion square foot (2007estimate), was tanned with chrome.

In such a process, only the trivalent chrome is tanning. Depending on the quality of the tannins however contaminations of toxic chrome (IV) are possible and likely. In the conventional chrome tanning more chrome tannin is added to the tanning broth than is necessary for the actual tanning procedure. In this way, about 30 % -50 % of the tannin is not bound in the leather and displaces into the so-called residual liquor – the remaining liquid after the tanning. Partly the chrome can be re-extracted from it again. The balance of approximately 5-6 kg chrome per ton of hides however is ‘disposed’ by the wastewater. At best it goes into the sludge – provided that a well functioning sewage plant exists – in a worse case it ends up in the surrounding community’s water.

In more modern, so-called highly emaciating tanning methods with chrome, the chrome is being used in a modified form. From this tannin the chrome is being bound to the leather up to 95-97 %. The wastewater is being less polluted. A well controlled, reliable process management and wastewater treatment, as it is presumed in most European tanneries with higher environmental safeguard standards, can limit the pollution of water through chrome tanning. However as investigations by environmental organizations show this unfortunately is not the case for all tanneries worldwide (see below). 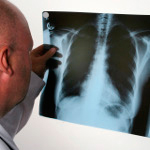 Not all chromes are alike – the hexavalent chrome is highly toxic and carcinogenic. Small amounts of the trivalent chrome are healthy,however, higher amounts are harmful to a person’s health.

The effects on health of chrome depends on its value and concentration. Chrome (III) compounds have low toxicity because they are hardly absorbed by the body. In contrast chrome (IV) compound are very toxic. Chrome (III) is deemed to be an essential trace element. In very small quantities it is vital to life for humans. Chrome (III) has an effect on the sugar and lipid metabolism. It can prevent lipid, thrombus, connective tissue and lime to deposit in the vessel walls. Additionally (that) it has shown a positive effect on diabetes. The recommended daily intake of chrome (III) consummated with the food is at 20-100 microgram (0.00002 – 0.0001 g/d).

Higher amounts of intake however are harming. It carries the threat of liver, renal and circulation damage. Because of this the concentration of chrome in drinking water is limited. In Germany it is at 0.01 mg/l (MCL = maximum contaminant level, viz. the level at which damage (of) healthy adult persons can chiefly (relatively sure) be avoided.

Chrome (VI) is highly toxic, allergenic and is classified as carcinogenic. Poisoning symptoms are inflammations of the mucosa, ulcers and eczemas, as well as allergies. Because of this limiting values for chrome (VI) compound in materials apply in Germany.

The carcinogenic effect of chrome (VI) is due to the fact that the little chromium can penetrate the cell membrane and like this cause damage in the cell. Chrome (VI) can be reduced to chrome (III) inside the body. Like this chromium (III) enriches in the cell tissue and produces DNA protein complexes that can lead to mutations. Chrome (VI) is again and again found in many utensils for everyday use.

The Federal Institute for Risk Management (BfR) carried out measurements of the chrome (VI) content in leather goods and found the highest encumbrances in gloves, shoes and leather clothing.  Chrome (VI) in some investigations has been found in amounts partly relevant to health in more than half of the tested products. In March 2007 the magazine markt 20 had shoes for children tested. Every fifth tested shoe was too high polluted with chrome (VI), including some brand-name products. 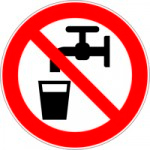 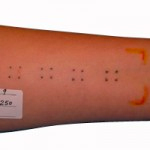 More than half a million people in Germany are sensitive to chrome. Measured by the frequency of the occurrence of sensitization chrome (VI) is one of the most important allergens. A study of the ‘Information Network of Departments of Dermatology for the surveillance and scientific evaluation of contact allergies’ (IVDK) of 2004 shows that 5.3 % of the patients of dermatological clinics reacted (sensitively) to chrome (VI). Chrome (VI) took the fifth place of the most frequent allergens. More than 500.000 cases were affected.

According to assessments of the Federal Environment Office (UBA) sensitivity rates of up to 1 % are seen as acceptable and beyond about 2 % there is cause for concern, more than 3 % is seen as serious problem by the UBA. Worldwide the chrome tanning is causing devastating environmental pollution while degrading  the health and habitat of millions of people, animals and plants.

Chrome is listed in third place in the list of the Blacksmith Institute in New York of the ‘Top toxic threats’. 7.3 million people are demonstrably affected by the health risks of chrome and 75 % of the most polluted locations are in South Asia. The high amount of polluted places in this part of the world is leads to the large density of tanneries of which many do not have sufficient environmental protection measures. All in all, the number of people who suffer from environmental pollution by chrome is estimated on 13-17 million. Chrome (VI) can lead to different types of cancer. Depending on the recording path it can cause lung cancer, cancer of the digestive system or the promotion of skin cancer. The World Health Organization WHO detected these diseases on 8000 workers in tanneries in the region of Hazaribagh in Bangladesh. Accordingly the immune system can be damaged and the embryonic development can be disturbed.

Although chrome (III) is considered less harming to health than chrome (VI) investigations in India have revealed that humans that are permanently exposed to chrome (III), for example at work, show damages of the lymphocytes-DNA. In addition a concentration of chrome in the body can lead to damages of the iron metabolism, what has negative effects on the blood count. In the list of the most polluted places of the world that has been assembled by the ‘Polluted Place Initiative’ , the region of Ranipet in India is one of the ‘top ten’. Here the waste of tanneries, inter alia chrome compound, has polluted the ground and water so much, that 3.500.000 people are at risk. The ways in which chrome can get into the environment and further into the human body and cause damages are various. 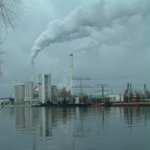 Wastewater and the waste of chrome tanning likewise exist in developed nations because it is not easyto dispose of heavy metals.  The  concentrateof heavy metals in the ground renders it unusable for agriculture. Wastewater containing chrome is present where waste water treatment is not made  according to the most current state of the art techniques. This is a problembecause via the wastewater of tanneries, chrome gets into streams, rivers, lakes and grounds. Humans either directly use it as drinking water or plants and animals take it in and with the food chain it enters into the human body. Affected by it are, as so often, the poorest people who have no alternatives for the polluted water and the toxic food.

In Germany relatively strict rules on the treatment of wastewater and the handling of the resulting sludge are valid. The application of sludge onto agricultural used areas, that would make sense in terms of the ecological recycling management, is only allowed for sludge that contains less than 900 mg chrome per kg dry matter. In addition the ground is not allowed to have more than 100 mg chrome per kg soil dry weight. The application on market gardening, fruit growing, nature reserves and water protection areas is prohibited.

In the burning of chrome containing leather waste, chrome (III) can become the highly toxic chrome (VI). Leather waste containing chrome that is derived from the production of leather goods, shoes, leather clothing and cushions, for example as cuttings, can lead to further pollution. At the end of the use each of these products turns into waste itself. The burning of chrome tanned leather waste carries the risk that chrome (III) can be turned into the highly toxic chrome (IV). Partly it is filtered from the exhaust gases by modern, effective working flue gas cleaning plants. Even in Germany residents near waste incineration plants must defend themselves against industrial processes because optimal conditions are not always guaranteed. In countries of leather production such as India, it is not unusual that the leather waste is burned in the open air. Toxic smoke harms the workers as well as the population in the vicinity of the tanneries.Protest favoring higher quality environmental conditions is often not a viable option in many developing nations.